Wrist Ship Supply has increased net sales to more than DKK 3 billion and managed to increase net profit with 25 percent. These are some of the results in the Annual Report, which has just been published. The positive results are due to more efficiency and solid growth in the shipping and offshore market. In 2013, Wrist became a stand-alone company and new long term committed financing was secured - enabling both current operations and acquisitions in the years to come. 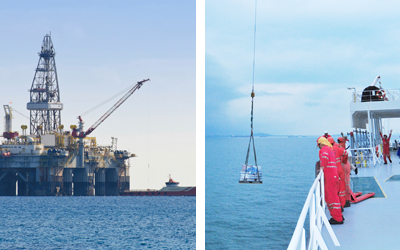 In 2013, Wrist further consolidated its position as the world's largest supplier to ships and offshore locations and increased sales above market growth.

Since 2009, sales have more than doubled. In the same period, operating profit (EBITDA) has gone from DKK 40 million to DKK 180 million, and Wrist nearly doubled the operating margin – from 3 percent to 5.9 over the past years.

Net profit for the year amounted to DKK 76 million compared to DKK 61 million in 2012, which is an increase of 25 percent.

These are a few of the noteworthy results in the Annual Report, which was submitted to and adopted by the annual general meeting.

Focus on customer service
"We experienced solid and organic growth in 2013. In a challenging market, the results are very satisfying and a sign of better efficiency as the number of employees was increased only 3 percent against the growth in sales of 8 percent in local currencies. Once again, our constant focus on customer service, responsiveness to change in customer demands and competitive sourcing has proved its worth," says Robert Kledal, CEO, Wrist Ship Supply.

Except for the Far East, net sales for all regions developed positively. North America continued strong growth with an increase of 10 percent in local currencies. Furthermore, Wrist faced growth in the offshore supply in both the North American area and in the North Sea.

Prepared for expansion
In 2013, Wrist became a stand-alone company after a split of Wrist Group into Wrist Ship Supply and OW Bunker. Practically, the two companies have been separated for a couple of years, but the split was formally concluded in November 2013.

By extension, Wrist has adopted an ambitious growth strategy, emphasising both the shipping and off shore industry. In addition, new long term committed financing was secured – giving Wrist opportunity to make expansive investments and acquisitions in the years to come.

"Wrist has the financial strength, operating platform and strategic roadmap to further consolidate its position as the leading global supplier of provisions and stores for ships and offshore locations," says Robert Kledal.

Last year, Wrist initiated large investments that include new premises in Singapore, a new business system as well as quality management systems, achieving, for example, a high-level quality accreditation of the US operations based in Houston. In total, investments amounted to DKK 102 million in 2013.

The new business system is based on a new IT infrastructure, and the aim is to get even higher customer service and operational efficiency and to mainstream the solutions globally. Furthermore, the system provides a more simple integration, which eases possible acquisitions in the future.

Wrist also invested in innovation and solutions that improve its range of service offerings. As an example, the company invested in "Ice-Box" containers, which can keep refrigerated supplies at a stable temperature for several days without a power source. The "Ice-Box" was developed in cooperation with an equipment manufacturer, drawing on Wrist’s offshore specialist knowledge.

Wrist expects further growth
The shipping industry expects to face another challenging year in 2014. Activity in the ship supply markets is dependent on the growth in global transport and thus the global economic recovery. However, Wrist expects growth in both the shipping and offshore industries and is well prepared for this.

“We expect to increase net sales in 2014 and perform better than the general market. We anticipate that activities will continue to grow, benefiting from our strong market position, our well-known service and the validity of the business model,” concludes Robert Kledal. 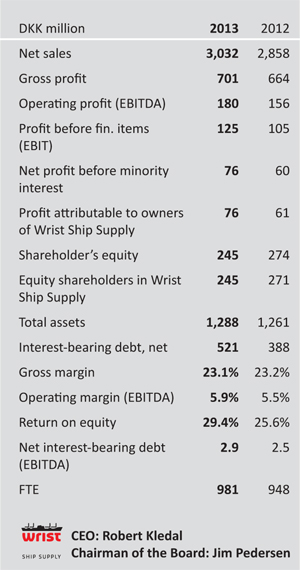 About Wrist
Wrist Ship Supply is the world's leading ship and offshore supplier. We provide a global 24/7/365 service offering, including handling of owners' goods, shipping, airfreight and related marine and offshore services that meet the demands of both multi-national organisations as well as small local businesses. We take pride in making it easy for our customers to receive their supplies, wherever they are needed, efficiently and at the best possible price – this is encapsulated in our mission: Expert Care to Each Ship & Offshore Location.
Since 2007, the majority shareholder has been Altor Fund II GP Limited.