For the fifth year in a row, Wrist Ship Supply has managed to increase both revenue and profits considerably. These positive results are due to successful acquisitions, massive investments in infrastructure and an insistence on growth never affecting customer satisfaction. 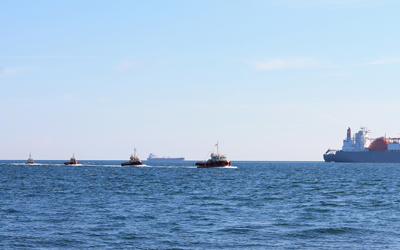 In 2014, Wrist Ship Supply once again cemented its position as the largest provider of ship and offshore supplies with growth rates that were significantly higher than the market growth.

Profits increased with 37 percent
Operating profits (EBITDA) have increased from DKK 180 million in 2013 to an impressive DKK 212 million in 2014 – equalling an increase of 18 percent. The EBITDA margin has grown from 5.9 to 6.3 percent. Add to this DKK 33 million from sales of facilities in Singapore, where Wrist moved into a new domicile in 2013.

“We have had yet another very satisfactory year in a challenging market. For practically all key figures, we’re performing better than expected. From a total growth of 9.5 percent, only 0.9 percent are from acquisitions, so our growth is primarily organic, which is still important to us,” says Robert Kledal, CEO of Wrist.

All units are contributing
The positive results are due to solid efforts and growth across the board:

“Pretty much all of our more than 30 operational units have contributed positively to this development. None have fallen by the wayside. This is the primary explanation for our excellent results. And on the sales front, we have experienced strong developments – particularly in North America. Also within our offshore related activities we have experienced a positive development. These are some of the most considerable contributors to the increase in sales,” Robert Kledal explains.

In addition to growth in the existing business, Wrist has in 2014 acquired two companies that provided ship trading out of Vancouver, Seattle and Long Beach. These have also contributed positively to both sales and revenue.

“Acquisitions are definitely a core element in our consolidation strategy, and we have considered and are still considering several opportunities,” Robert Kledal states.

A year of considerable investments
Another essential element in this still increasing growth is a series of substantial investments – particularly in infrastructure. This includes new warehouses, cooling and freezer facilities in Long Beach, New Orleans, Vancouver, Montreal and Rotterdam, as well as a brand new ERP system that will roll out starting March 2015.

Another important infrastructure investment is the Ice Box containers that can keep foodstuffs steadily cold for up to five days without the use of electricity. They were introduced to the market in 2013, but aroused the market’s interest in earnest in 2014. The offshore sector in particular has realised the potential of this product.

“The goal of these massive investments in infrastructure is always to improve the options for servicing our customers – in terms of increased security of supply, optimised purchasing process, better prices, and so on. Our customers are the core of our business. Our growth is first and foremost attributable to our ability to satisfy our customers, and growth must never negatively impact customer satisfaction. As such, I’m particularly proud that we manage to achieve a record year while maintaining and expanding our customer network. Combining double digit growth rates with satisfied customers is an exciting challenge,” says Robert Kledal.

Continued optimism despite offshore challenges
There are many indications that the industry will be facing another challenging year in 2015, but Robert Kledal remains optimistic:

“In the shipping domain, we still have positive expectations for the development. We’re a bit more hesitant when it comes to offshore, which is currently under pressure from oil prices. This renders some uncertainty to the number of new prospects and so on, but in general, we still expect growth in both sales and profits for Wrist,” Robert Kledal concludes. 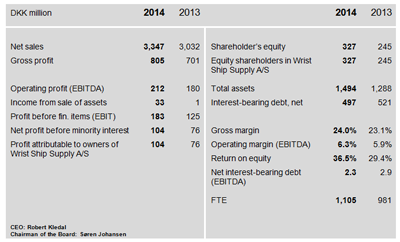 About Wrist
Wrist Ship Supply is the world’s leading ship and offshore supplier. We provide a global 24/7/365 service offering, including handling of owners’ goods, shipping, airfreight and related marine and offshore solutions that meet the demands of both multi-national organisations and small local businesses. We take pride in making it easy for our customers to receive their supplies efficiently and at the best possible price, wherever they are needed. This is encapsulated in our mission: Expert Care to Each Ship & Offshore Location. Since 2007, the majority shareholder in Wrist Ship Supply has been Altor Fund II GP Limited.